The RBRconcerto APT is a deepwater high resolution bottom pressure recorder and triaxial accelerometer, capable of both observatory-connected and autonomous measurements at 20Hz. Data is always recorded internally, but may also be streamed in real time over the Ethernet connection.

The hardware structure of the instrument is shown in the block diagram below.

The MINK connector is wired for ethernet and power.

Face view of the male MINK connector on the RBRconcerto APT:

Connector pinouts are shown in the table below:

IP connections to the instrument are made on two different ports. The first is the data port (23) which is a read-only socket where the client should simply listen for the measured data that is being streamed out. The second is the control port (2323) which permits some settings to be modified.

Logger readings will be timestamped no earlier than 50ms and no later than 100ms from when the reading was completed. The resolution of logger timestamps is 50ms. Logger output of the timestamped sample will occur within 50ms of the indicated timestamp.

The network controller associates each sample received from the logger with an NTP-based timestamp upon receiving the first character of the line of data from the logger. The resolution of NTP-based timestamps is 5ms. After receiving the entire sample, it is buffered for filtering. After filtering, if there is an active connection to the data port, samples are sent to that connection. A output latency of (pre-buffer size) + (post-buffer size) + 2 samples is incurred by filtering; in the default case, this is 25 samples (or at a logging rate of 20Hz, 1.25 seconds).

In the default configuration, output from the instrument will occur within 1.4 seconds of when the reading was taken.

Starting up for the first time

In order to start the logger, use the transparent mode in the control interface and the following commands. These assume that the logger clock has been reset already, if of interest ( now command).

To configure the network controller, a Windows-only executable is required to run on a host on the same subnet (same UDP broadcast domain) as the instrument.

In its default state, the instrument will attempt to acquire network configuration information via DHCP. Using IPSetup, the static IP address, network mask, gateway, and DNS server of the instrument can be configured. No other settings in IPSetup should be changed at risk of an invalid configuration requiring the instrument be returned to RBR for service.

As the instrument has a linear memory, in order to provide protection for a possible network outage it is important to periodically stop the logging, erase the memory, and restart. This process should take less than ten seconds, during which there will be no streaming data, nor logged data. As the logger memory will fill in ~25 days, this process should be followed every 20 days (or 3 weeks) to give some margin for human error.

The download can be performed by reading all the bytes in the dataset 1 and writing them in a *.bin file. Ruskin is able to read directly those files.

For more details on the read and meminfo commands and the CRC calculation, please refer to the L2 command reference.

Stopping the instruments and preparing for shipment

Upon connection to the control port (2323), there will be no immediate response nor banner. If the command required is known, it can be entered immediately (all commands are terminated with line-feed, and any carriage returns are ignored). If the commands are not known, the question mark ("?") command can be used to display the network controller control menu.

The control port connection supports a single connection. It is important that the connection is closed after use, permitting others to establish connections if necessary.

The current settings shown include

The filter is used for the spike detection process. The factory default value is 12 and no changes are recommended.

The filter is used for the spike detection process. The factory default value is 11 and no changes are recommended.

By default, the NTP Pool will be used as the source of NTP times. A custom NTP server can be used by providing its IP address.

Whenever this value is changed, an NTP poll is performed immediately and the schedule for polling is restarted.

The frequency with which time is polled from the NTP source can be adjusted.

Whenever this value is changed, an NTP poll is performed immediately and the schedule for polling is restarted.

There are two ways of leaving transparent mode: manually escaping with the ! character (described below), and an automatic idle timeout. If 10 seconds elapse without characters being received by the network controller, transparent mode will automatically be closed and streaming output will be restarted.

When in transparent mode, send a ! character to immediately leave the mode and restart instrument streaming.

See the notes for the T command for details on the behaviour of the data port upon leaving transparent mode.

Explicitly close the connection to the control port.

The control interface is reset by this command, a process that takes <10s. All network connections are lost and will have to be re-established. The network controller clock is reset to the beginning of 1970, but the first NTP sync should be done by the time the first connection is made.

Displays the menu as shown above.

The data port provides read-only data, and does not respond to any commands.

The format of the data is as follows:

One variation to the normal data format will occur when an internal error occurs. This error usually happens on a single channel at a time, and is most often caused by a failed electrical connection so that no valid readings are available. If this occurs, it will look like the following:

All errors should be reported to RBR for investigation.

All events obey the following format:

EVENT_NAME is a string name for the event
timestamp is the time at which the event occurred; depending on the event type, this may correspond to a corrected sample time
eventPayload1—eventPayloadn are the payload values for the event

From time to time, the controller will detect one outlier in the data (spike) via its spike-detection algorithm. When this event occurs, the normal data value for the 'spiky' channel will be replaced by a first-order linear interpolation of the value on each side of the spike. At 20Hz, the spikes always occur as double readings, so readings #2 and #3 are replaced with interpolated data between reading #1 and #4. The uncorrected data is also output for convenience, but marked by "#SPIKE" at the beginning. While the timestamp sequence may appear to be out of order, the timestamps are still trustworthy and thus one can tell exactly which sample has had a spike-correction performed. In the following example, it is column 3 (accelerometer X) that has been replaced. All other readings were unmodified.

When an NTP synchronization occurs, one event #NTPSYNC event will be generated on the output:

The power consumption when the external power is present is ~1.5W continuous.

The logger will switch to its internal battery and continue recording when external power is not present. The network controller will shutdown automatically under this condition.

There is enough internal batteries for the logger to continue recording for 250 hours (~210 mW power consumption in such case).

Each instrument contains one pressure sensor and one accelerometer. The calibration certificates, containing the coefficients necessary for both temperature compensation and conversion to engineering values, are in the following table.

How to disassemble the housing

IMPORTANT: Do not unscrew housings while the two halves of the instrument are together; unscrewing will twist sensitive wire assemblies inside the instrument and damage them.

How to change the batteries

How to change the desiccant 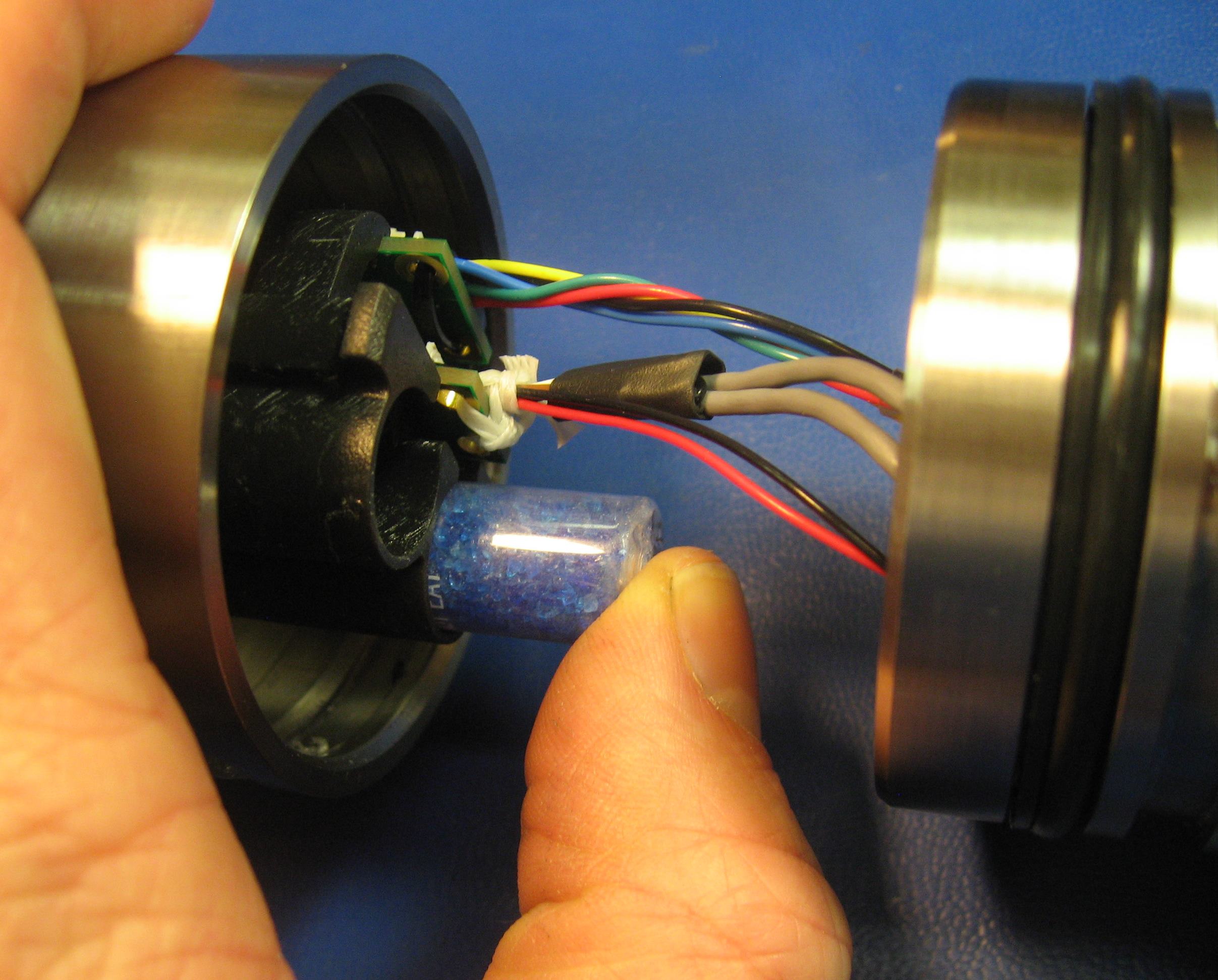 How to reassemble the housing

Parker 2-225 N70 o-rings and 8-225 back up rings are used at every joint in the housing. Only o-rings that are exposed during maintenance need to be checked before reassembly.